To ADD YOUR VOICE to those opposing this cruelty, sign our new petition here.

It's been more than a year now since an injured and sick opossum was left dangling in a plexiglass box for hours above a raucous crowd on New Year's Eve 2018, while music blared and fireworks were set off. The shy and gentle animal we now call Millie survived her ordeal, though she will never recover from her injuries. Her leg was amputated in early January 2019, despite her veterinarian's every attempt to save it.

The veterinarian who treated Millie after the event stated that her injuries were consistent with those caused by leghold traps and snares. She had suffered both prolonged loss of circulation to her left front paw and a broken bone in her left front leg. Left untreated by her "handlers" before the event, Millie's injuries led to an infection so severe that it could be smelled from a distance during the New Year's Eve event.

Despite Millie's condition, organizers dangled her for hours prior to midnight in a box above a noisy crowd while a band played and fireworks were set off. Experts testify the stress from the raucous atmosphere alone – even without the injury and illness Millie was enduring – is likely to cause serious illnesses among shy, gentle animals such as opossums.

Amputation was necessary to save Millie's life. She is learning to get around on three legs, though you can still see her left shoulder joint at work in its futile attempt to move her phantom limb. 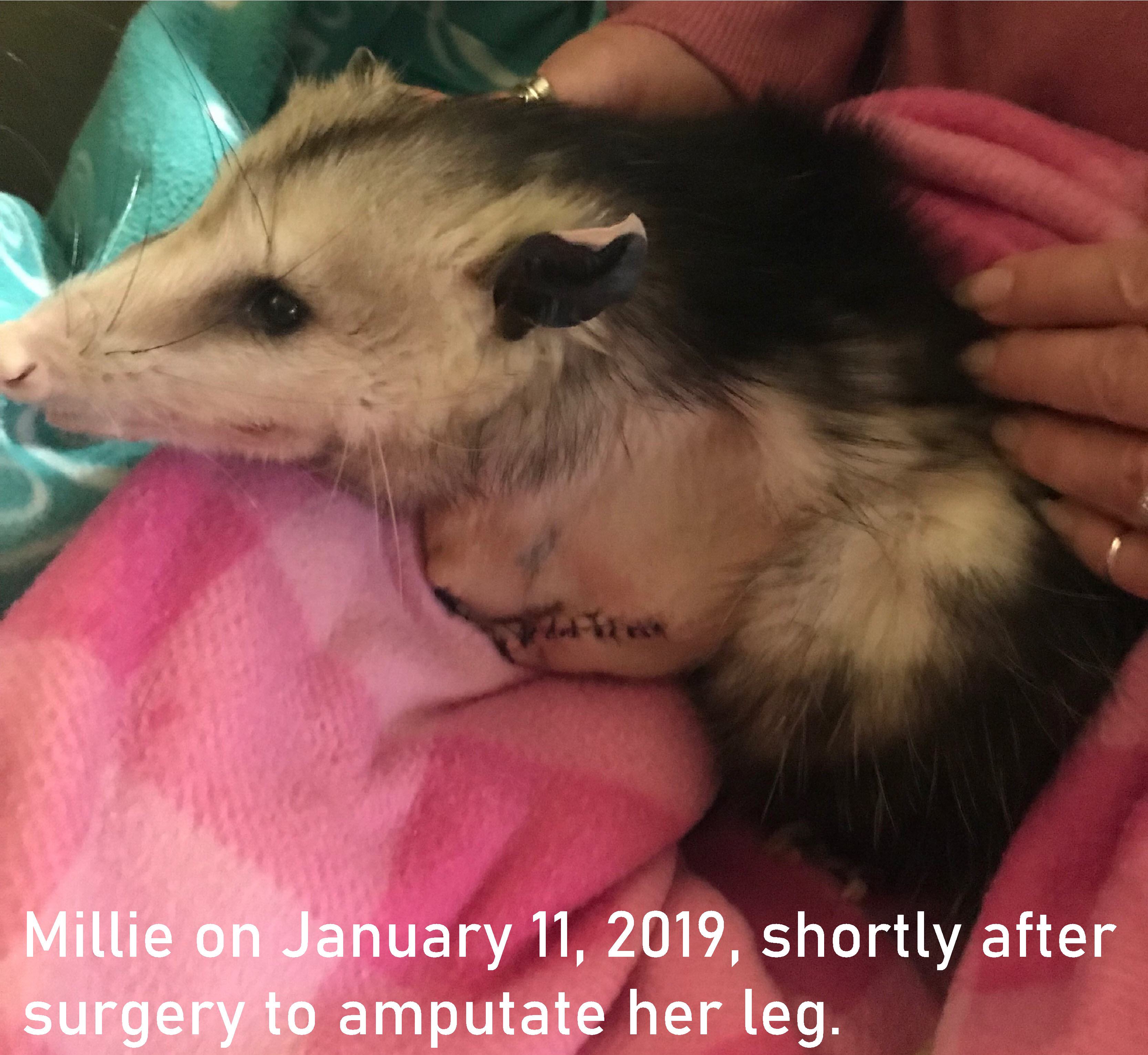 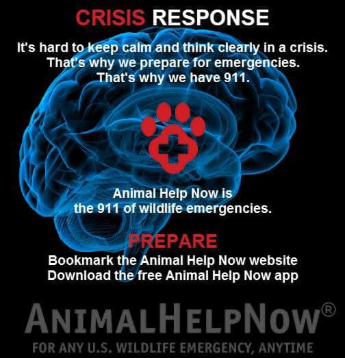 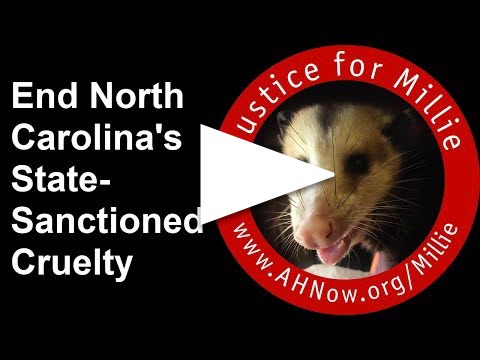 An "opossum drop" is an event, similar to the New York City's Times Square ball drop, that takes place on New Year's Eve and involves:

The event is broadly opposed for ethical reasons and has been a subject of controversy through the years. It was legally sanctioned in 2015 when, after a lawsuit effectively ended the event, state legislators passed the following law: N.C.G.S. § 113-291.13, Application of wildlife laws to opossums. No State or local statutes, rules, regulations, or ordinances related to the capture, captivity, treatment, or release of wildlife shall apply to the Virginia opossum (Didelphis virginiana) between the dates of December 29 of each year and January 2 of each subsequent year. 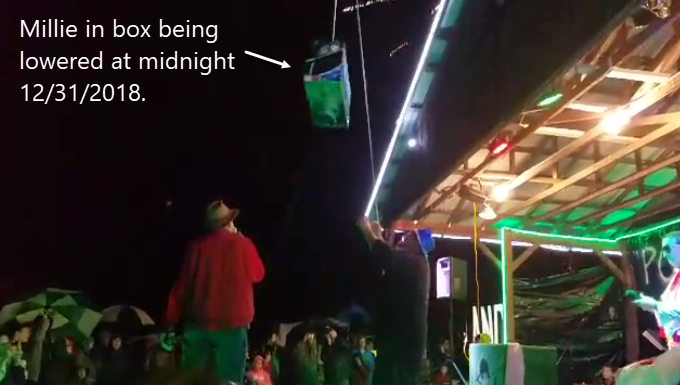 According to wildlife rehabilitators, several of the opossums used for the event over the years have required care before being released and several others were released with obvious injuries. Despite their claims, the organizers have never provided proof that veterinary care was provided for any of the animals used in the "drop."

Beth Sparks, a wildlife rehabilitator who for more than 12 years has publicly opposed the opossum "drop," states, "Exploiting a shy wild animal is immoral – plain and simple. NC legislators should be ashamed of their complicity here. They are responsible for allowing a window each year when opossums can be abused. We demand they repeal this law..."

"Having been a wildlife biologist and veterinarian for close to 50 years, I have worked with hundreds of species of native wildlife, including a great many opossums. Although these animals may not be at the top of the heap in terms of brain power, they are adaptable, sensitive, easily stressed, and worthy of our concern. When opossums are poorly captured or handled they can suffer fractures, stress cardiomyopathy, capture myopathy and stress-related dermal septic necrosis – all of which are painful and can be fatal."
- Mark A. Pokras, B.S., D.V.M., Associate Professor Emeritus, Wildlife Clinic & Center for Conservation Medicine, Cummings School of Veterinary Medicine, Tufts University


"Dermal Septic Necrosis, or DSN, is a condition that can occur in opossums as a result of stress and/or trauma. A serious and potentially fatal body-wide infection, DSN can affect multiple organs such as the heart, liver, kidneys, and the skin. This is a serious systemic infection that is difficult to treat and often fatal. Trapping and holding an opossum in captivity, then subjecting the animal to the noise, sights and smells of a New Year’s Eve crowd while suspended in a plexiglass box are more than enough to cause DSN and other pathologies in the animal."
- Elizabeth Daher, D.V.M.


"The Virginia opossum is the only marsupial found in the United States and has been around for at least 70 million years - one of Earth's oldest surviving mammals, around since the time of the dinosaurs. They are incredibly resilient yet shy and are mostly nocturnal. They do not like confrontation and will do just about anything to avoid it. They will urinate, defecate, belch, run, growl, hiss (showing their many sharp pointed teeth) and “play possum” or act dead, slowing their breathing, pulse and going rigid, into a coma like state that can last 4 hours.

The biggest threat to these timid creatures? Humans and abuses such as the kind that occur every year in NC. Stress is the number one killer of wildlife. Stress from capture (capture myopathy), stress in their captive environment (loud noises, vibrations, a lot of activity, constant exposure to light) can cause inappetence or anorexia, stress leukograms which can contribute negatively to shock, sepsis, stress cardiomyopathy, dermal septic necrosis and a myriad of other negative and painful health conditions that can leave the subjected animal permanently disabled or dead. It is beyond my comprehension how for 5 days out of the year, one of our oldest and most unique native mammals can just lose their protections and be abused in such a horrible way.

Not only can the capture be brutal and cause physical harm, such as broken bones and capture myopathy, but the exposure to so much activity, noise and light can cause enough stress to kill these gentle creatures. There is no denying that the opossum drop is a cruel and horrible practice that should be illegal year round!"
- Beth Hirschfeld D.V.M., C.V.A, V.M.O., Owner, Hirschfeld Veterinary Consulting, Inc., Chief of Veterinary Medicine for Flamingo Gardens, Jungle Queen and Billie Swamp Safari, President of Florida Wildlife Rehabilitators Association


"As a veterinarian who has had extensive wildlife training and experience, I've worked with the Virginia opossum for more than 32 years. I've come to know these animals as exhibiting quiet, nocturnal, and nonaggressive behaviors. They possess sensitive hearing and eyes specifically adapted to a dark environment, and have evolved a very slow paced demeanor. Subjecting them to the extreme noise and flashing lights associated with fireworks, live bands, and yelling people, and the wildly jostling movements experienced in the "drop box" is indeed cruelty for a senseless reason. The duress endured by an individual most likely will cause the animal stress-induced injuries including, but not limited to capture myopathy, dermal septic necrosis and cardiomyopathy. These afflictions can take days to weeks to manifest, so watching an animal walk back to the woods the next day is not indicative of its long term health. In this technologically advanced time, why wouldn't you use an animatronic Swarovski crystal studded faux opossum and enter the 21st century?!?"
- Deb Anderson, D.V.M.

"Opossums are incredibly timid and gentle souls who can become so overwhelmed with fear and anxiety that their bodies literally shut down into a coma-like state. Stress cardiomyopathy, capture myopathy and stress-related dermal septic necrosis (DSN) are common in opossums and can be fatal. The opossum drop is, without a doubt, cruel." - Emilie Nelson, Director, NC Wildlife Rehab, Lincolnton, NC

"A few years ago, wildlife professionals, attesting to the well-known stress-related diseases common in opossums, sent many documents and affidavits to various authorities. These authorities are complicit in causing the suffering and the amputation this animal endured." - Stephanie Weinberg, Wildlife Rehabilitator, Emerald Isle, NC


"The rest of the year, we are – quite rightly – strictly regulated to provide decent housing and care for opossums, but for those five days in winter, it's 'do as you please'. Absolute hypocrisy!" - Hannah Simmonds, President, River Rock Wildlife Rehab, Connelly Springs, NC


"Opossums are shy and quiet creatures. The fear and stress caused by being captured and subjected to noise and general chaos will shorten the life of an animal with an already brief lifespan." - Rebecca F. Marlin, Outer Banks Wild Care, Buxton, NC