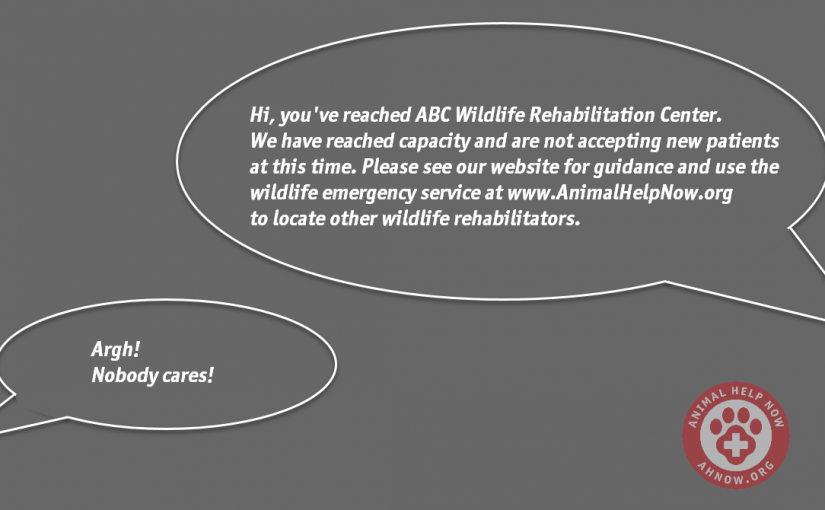 A desperate chorus rises each year as spring turns into summer, and wildlife rehabilitators across the country approach or reach capacity.

It can be nearly impossible in many parts of the United States to find help for wildlife emergencies at this time of year (wildlife baby season and migration). This is tragic for the animals who need help, and it’s tragic for the good humans who are trying to help them.

A familiar refrain of frustration returns to social media, email inboxes, and voicemail messages from the would-be rescuers: Nobody cares!

It doesn’t mean our communities have come together to develop systemic approaches to mitigating the ubiquitous anthropogenic threats (cat and dog attacks, window strikes, motor vehicle strikes, poorly executed “nuisance” wildlife control, etc.) that result in millions of wild animals getting injured and killed in the United States every day.

Wildlife ambulances should not be the stuff of science fiction.

As your stomach turns and you jump into action after hearing the dreaded thump of a bird hitting a window, seeing a bleeding and broken-shelled turtle in the road, encountering your neighbor’s outdoor cat with a bird in her mouth, you know instantly that you will need help as quickly as possible. And it is gut-wrenchingly tragic (to the empathetic among us) that sometimes there simply is no help. When no help is available, when your only option might be to find a veterinarian who will euthanize the animal, you are rightly anguished, sad, angry….

And you may lash out. Nobody cares!

But of course that’s not true. You care. The hundreds of people looking for help for another animal in need in some other place but at the exact same time you are – they care. The volunteers who do the work to get licensed to rehabilitate wildlife and who often work out of their homes, covering their own expenses, doing their best to get phone calls returned between feedings, having compromised sleep for months on end – they care. The paid staff and volunteers serving wildlife rehabilitation centers, rescues, and hotlines care. The veterinarians who are willing to stabilize wildlife care. Many wildlife and law enforcement agents care.

It may be fair to say that more people care than do not!

We simply must make this a safer world for wildlife and lift up wildlife rehabilitation where it belongs. Animal Help Now lays it out in its vision statement.

Animal Help Now envisions a world in which humans:

This is going to take a society-wide effort, from businesses to HOAs to all levels of government. State legislatures and state wildlife agencies and the commissions that direct them, in particular, can and must do better. More than enough people care. More than enough to effect such changes, that is. We just have to be better organized, better directed, and a bit quicker about it.