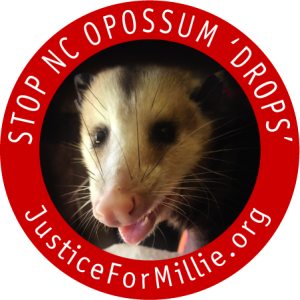 In 2015, the North Carolina General Assembly enacted a law (SL 2015-73) that suspends all protections for opossums for five days surrounding the New Year. The law exists for the purpose of entertainment at a New Year’s Eve event called a “possum drop.” At this event, instead of lowering a ball, as done in New York City’s Times Square, a live opossum in a plexiglass box is lowered at midnight.

Millie, the opossum used in the 2018 “drop” in Andrews, was trapped from her home in the wild. The event left her permanently maimed and unable to return to her life in the wild.

The veterinarian who treated Millie after the event stated that her injuries were consistent with those caused by leghold traps and snares. She suffered both prolonged loss of circulation to her left front paw and a broken bone in her left front leg. Left untreated by her “handlers” before the event, Millie’s injuries led to an infection so severe that it could be smelled from a distance during the New Year’s Eve event. Amputation was necessary to save her life.

Despite Millie’s condition, organizers dangled her for hours prior to midnight in a box above a noisy crowd while a band played and fireworks were set off. Experts testify this stress alone is enough to cause serious illnesses among shy, gentle animals such as opossums.

The entertainment of a few hundred people for a couple hours is inadequate justification for stripping the benign and beneficial opossum of all protections afforded by state and local laws – laws that have been in place for decades. Elected officials must repeal the law.

SL 2015-73 goes beyond allowing “opossum drops” in the state; it allows anyone in North Carolina to legally abuse opossums.

Millie was tormented, and she eventually had to have her leg amputated … all in the name of a few hours of entertainment! She can never go home. This must never happen again!

We, the undersigned, demand the immediate repeal of North Carolina’s “Be Cruel to Opossums” law (SL 2015-73).