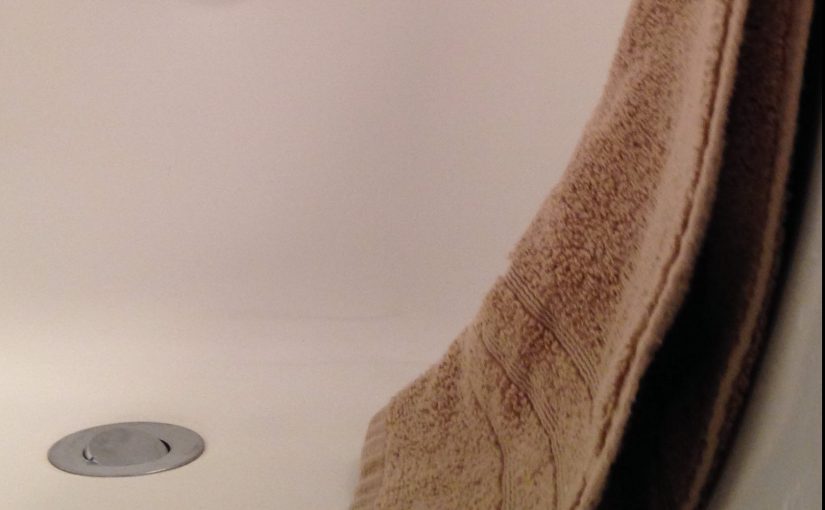 I’ve seen two in my bathtub now in the past several weeks. Both times were when I’d forgotten to put up their escape “ladder” – that is to say, the hand towel I keep draped over the edge of the tub.

Yes. The two times I’ve failed to replace the towel after using the tub, I’ve found spiders stranded in the basin.

I scooped them up with a postcard and deposited them into a nearby corner on the bathroom floor, so they could return to exploring or hunting or whatever it is spiders do when they’re not sleeping.

Which is to say that (a) spiders seem to enjoy forays into my bathtub and (b) when I find them there they likely aren’t lying in wait.

And more to the point, it’s to say that I live with spiders and everyone seems to get along OK.

I understand the fear. And some spiders definitely evoke it in me more than others. So I understand the desire to deposit them not on the bathroom floor but outside the house. Whether or not this sentences many of them to death or hardship, I do not know, but I do care, and so I err on the side of caution (though, black widow, you shall go outside).

Note that these words are being written by a person once so frightened of spiders that he took an aerosol can and a lighter and torched one whose only crime was being in a place in my apartment where I couldn’t easily capture or otherwise kill him.

This same person who committed that awful act would many years later relocate a brown recluse and what appeared to be hundreds of her babies.

So things change, and that’s part of the point. The arc of one’s respect for others is long, but with any luck it bends toward an increase.

The other part of the point is to imagine for just a second the likelihood that a being as tall as a skyscraper would shiver or cower when encountering a tiny little human. Right? Get it?

Life is precious. Spiders are amazing. If you don’t want to see them, though, stop trapping them in tubs and sinks. A hand towel will do the trick.